As the days get longer and the temperatures get warmer, we all find ourselves spending more time outside. After a long day at work, there’s nothing better than sitting on your patio, deck, or porch, enjoying the weather while the kids play in the yard.

However, if wasps have chosen your Maryland property as their home, it can be difficult to enjoy spending time outdoors.

One wasps’ nest can house thousands of wasps, and if all of these stinging insects are buzzing around your property, they can make it hard to be outside.

If this is currently your reality, or if you want to avoid it from becoming your reality, American Pest has some tips on how to keep wasps away from your Maryland property this summer.

What Types Of Wasps Are Common In Maryland?

There are many species of stinging insects in the world and knowing which kinds are common in Maryland can help you identify the ones that are causing problems around your Maryland property.

Although bees can sting and are sometimes a nuisance for Maryland homeowners, they are also extremely important to our ecosystem. Overall, the threat of bees is quite low.

When it comes to stinging insects, wasps are the more common offender. However, there are many species of wasps, so it helps to know which ones are most likely to inhabit your property.

The following four types of wasps are common in Maryland.

European paper wasps are often mistaken for yellow jackets because of their similar appearance. They have black and yellow markings with very thin, pinched waists.

One simple way to tell them apart from yellowjackets is to watch them fly. When European paper wasps fly, their back legs dangle down.

Paper wasps get their name because they gather fibers from dead wood and mix them with their saliva to make papery nests.

These nests are often shaped like upside-down teardrops. Typically, the only time paper wasps are a threat to humans is if they feel their nest is being threatened.

Paper wasps feed on nectar as well as a variety of insects. These include caterpillars, beetle larvae, flies, and more.

Yellowjackets look very similar to paper wasps. They have the same yellow and black coloring and similar markings. They also have the same pinched waists.

However, yellowjackets tend to have thicker bodies that taper less distinctly to a point than paper wasps. Yellowjackets have black antennae while paper wasps have yellow antennae. 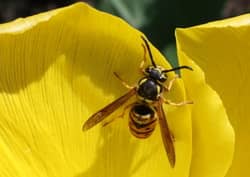 Finally, yellowjackets do not dangle their back legs when they fly like paper wasps do.

Unlike the large, easy-to-see nests that paper wasps construct, yellowjackets usually build their nests underground, under house eaves, or within wall voids.

Like paper wasps, they won’t attack without reason. They are very territorial, and if you get close to their nest, they will become extremely aggressive.

Unlike paper wasps and yellowjackets, who are social wasps, Eastern cicada killers are solitary wasps.

This means that they don’t live in a large colony like social wasps. Instead, they live alone. Eastern cicada killers typically build their nests in the ground.

Although their large size can make them appear quite fearsome, Eastern cicada killers are actually the most docile of the wasps in our area. They are unlikely to sting humans unless roughly handled.

As their name implies, Eastern cicada killers kill cicadas, but they don’t do it to eat the cicadas themselves.

Instead, they paralyze the cicadas and bring them to their nests so that their larvae can feed on the still-living cicada. Adult cicada killers eat nectar, sap, and plants.

European hornets are a type of wasp. They have brown and yellow striped bodies and are larger than yellowjackets, but have the same pinched waist that is common to most wasps species. 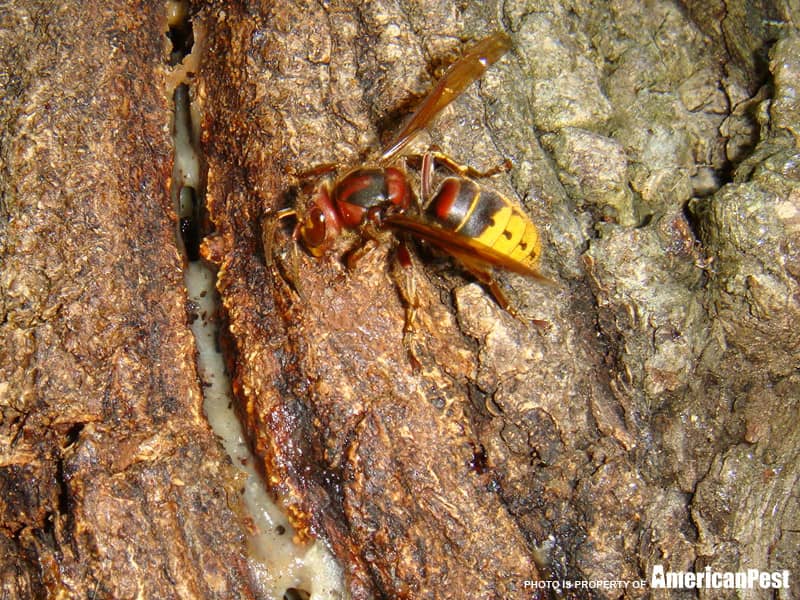 European hornets eat a variety of insects including flies, grasshoppers, and even yellowjackets. They also eat tree sap, honeydew, and fruits.

Are Stinging Insects Beneficial In Any Way?

Although they may seem like nothing more than a menace, wasps do benefit our ecosystem. Although their pollination powers are not as great as those of bees, wasps do contribute to the important work of pollination.

Wasps eat insects and larvae that can wreak havoc on crops and plants. In fact, some farmers will purchase wasps to help in their pest control efforts.

Although they contribute to pest control, for most Maryland homeowners the benefits do not outweigh the problems.

When wasps congregate around your home in large numbers, they become a nuisance to most and a hazard to some. Therefore, its important to exercise appropriate precautions to keep them away.

Why Are Stinging Insects A Problem For My Maryland Property?

If simply co-existing with wasps was an option, stinging insects wouldn’t be a problem for your Maryland property.

Unfortunately, it’s rarely that simple. If you end up with a wasps’ nest on your property, you’ll probably have thousands of wasps to contend with.

If that many wasps are buzzing around, they will become unavoidable, and despite your best efforts, you will wind up with a nasty sting.

If you want to eat a meal outside, wasps will make it nearly impossible.

Yellowjackets are especially notorious for crashing picnics and barbecues. They’ll buzz around your food, climb into your drinks, and make a nuisance of themselves.

However, since they can sting, they are more than a nuisance. They require careful handling to avoid painful stings.

Similarly, if you accidentally get too close to a wasp nest, you are sure to be met by aggressive wasps ready to defend their territory. Wasps can sting multiple times and often attack in a hoard.

Wasp stings are painful and unpleasant for anyone, but for people who have an allergy to stinging insects, getting stung can have serious or even fatal consequences.

How Can I Make My Maryland Property Less Appealing To Wasps?

By taking steps to make your property less appealing to wasps, you stand a good chance that they’ll decide to build their nest in a location other than your property.

The following tips will help keep stinging insects away from your home.

⭐ Do not leave food outside.

If you eat a meal outdoors, bring the leftovers inside as soon as you’re done and make sure to clean up all crumbs and messes on the table and ground.

⭐ Do not bring sweet drinks outdoors.

If you do, make sure to put a cover over your cup when you’re not drinking. Otherwise, a wasp could climb inside unnoticed and give you an unpleasant surprise when you take your next sip.

⭐ If you have outdoor garbage bins, make sure they have tightly fitting lids without any gaps.

If there are any gaps, wasps will find their way inside to get at any food items in the garbage bags.

⭐ If you have fruit trees, once they start producing fruit, clean up the fruit that falls to the ground.

Rotting fruit is a big attractant to wasps, and they’ll hang around your property to access that consistent food source.

⭐ Limit bright colors around your property.

Consider using neutral colors for patio furniture. Try to plant colorful flowers farther away from your house if possible.

⭐ Keep excess water to a minimum.

Look for areas where water might pool and eliminate those areas. Examples include potted plants, birdbaths, and clogged gutters.

Fortunately, many of these tips will not only deter stinging insects, but they will also keep other unwanted pests away from your home as well.

When it comes to preventative pest control, its important to stay vigilant so that you don't develop an unwanted problem.

What Should I Do If There Are A Lot Of Wasps On My Property?

Despite your best efforts, you may still find yourself in the throws of a stinging insect infestation that's out of control.

To eliminate a wasp problem, you need to find their nest. By following their movements, it’s usually fairly easy to figure out where wasps are nesting.

However, trying to get rid of a wasps’ nest on your own is a bad idea.

If you disrupt their nest, their territorial nature will cause them to attack you. With the potential of thousands of wasps in a nest, it's not worth the risk.

Instead, contact American Pest. Not only do we have years of experience taking care of stinging insect problems, but we also have the equipment to protect ourselves in the process.

We will eliminate your wasp problem safely and effectively, which will allow you to enjoy your Maryland yard without fear of being bothered or stung by wasps.

If you have questions or are ready to enlist our stinging insect removal services, contact American Pest today.