If you shuffle into your kitchen in the middle of the night and see cockroaches scatter when you flick on the light, chances are you don't really care what kind of roaches you are seeing.

They're cockroaches! And they need to be eliminated as soon as possible, right?

However, it is important to be able to tell what kind of roaches you are dealing with so you understand the different health threats they bring, the environmental factors that allow them to thrive, and the most effective methods to get rid of them. Today, we will take a look at three common types of cockroaches in our area and what you need to know most!

These roaches would be more aptly named "African” cockroaches since they were first brought to the U.S. on ships from Africa. These insects have oval-shaped bodies and are reddish-brown in color.

These roaches also have two antennae, six legs, and two sets of wings that sit upon their backs, giving them a rounded look at their tail end.

However, the American cockroach's most distinctive feature is the yellowish-colored figure-eight marking located behind their head. 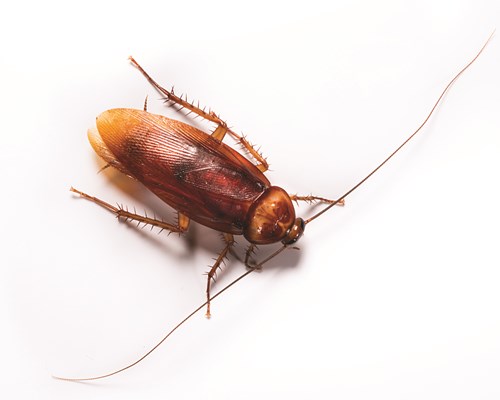 These roaches find harborage in damp, unsanitary places. Subsequently, they can contaminate food, food preparation areas, utensils, dishes, and more with the harmful bacteria and pathogens they pick up in these areas.

American cockroaches can pick up a variety of disease-forming bacteria which are known to cause food poisoning, dysentery, diarrhea, and other illnesses.

Though these roaches are the largest species of roach you may find inside your home or business, they have the ability to squeeze in through tiny gaps and cracks by compacting their bodies. American cockroaches are also able to scale both walls and ceilings, making it easier for them to find their way into attic spaces.

These roaches would be more aptly named "Asian" cockroaches since it is believed that this species originated in Asia. But now these roaches can be found all over the world, including Germany.

These cockroaches vary in color from light brown or tan to almost black, are oval-shaped, and have two antennae, six legs, and two sets of wings, much like the American cockroach.

However, these roaches can be distinguished from other roaches by the two parallel dark-colored stripes located behind their head. 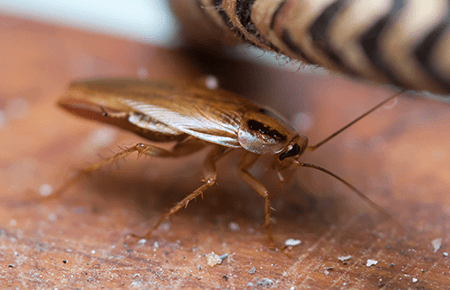 These roaches spread filth around homes, contaminate food sources and utensils, and can cause food poisoning and other illness.

They can also cause or exacerbate rashes and asthmatic symptoms to occur. Due to their ability to multiply quickly, the infestations and the health issues caused by German cockroaches can increase rapidly.

German cockroaches climb walls and traverse ceilings like all cockroaches, but also have the ability to fly, though they rarely do. These roaches are the smallest cockroaches that invade man-made structures.

In fact, German cockroaches are so tiny that their larvae can fit through the holes of an electrical outlet! This makes the spread of this species nearly impossible to control without the assistance of a pest control professional.

These roaches, which are also commonly referred to as water bugs or black beetles, prefer to hide in dark, damp areas. They range in color from dark brown to black and have glossy bodies.

Oriental cockroaches move in a more sluggish manner than many other roaches, but that doesn't stop them from spreading diseases.

The principal illnesses transmitted by these roaches are food poisoning, dysentery, and diarrhea, and other forms of gastroenteritis.

These moisture-loving roaches are drawn in by moist or wet conditions around a home. Once they have been drawn to a home, they will then find their way in through gaps and cracks in foundations and walls. Oriental cockroaches may also get into homes by crawling up through pipes and drains. Fixing leaky spigots or hoses may deter these roaches from invading.

How American Pest Can Help

If you need assistance in identifying what kind of roach you are dealing with, the professionals here at American Pest are happy to help.

No matter which type of roach you are dealing with, it is important to understand that they are all considered a health threat, and need to be eliminated from your home as soon as possible. For assistance in eliminating or controlling cockroaches, reach out to American Pest today!